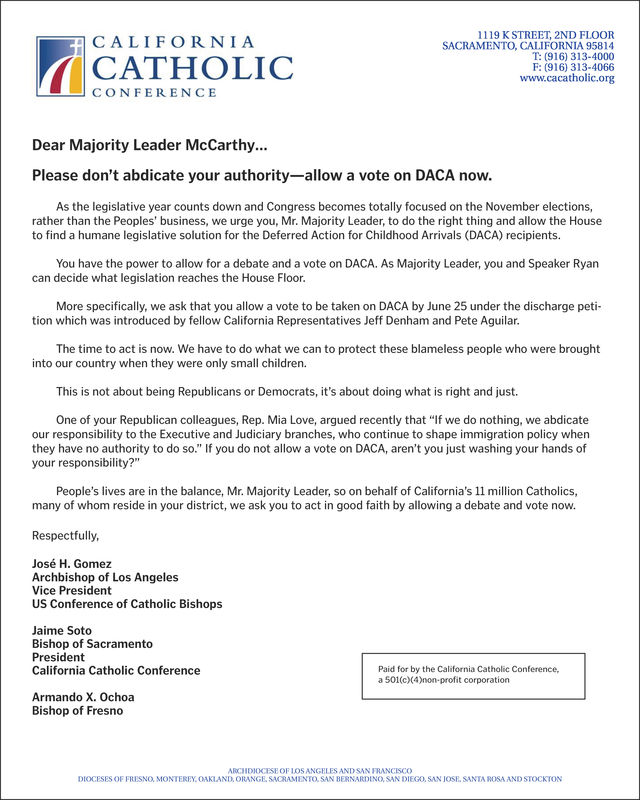 1119 K STREET, 2ND FLOOR SACRAMENTO, CALIFORNIA 95814 T: (916) 313-4000 F: (916) 313-4066 www.cacatholic.org CALIFORNIA CATHOLIC CONFERENCE Dear Majority Leader McCarthy... Please don't abdicate your authority-allow a vote on DACA now As the legislative year counts down and Congress becomes totally focused on the November elections, rather than the Peoples' business, we urge you, Mr. Majority Leader, to do the right thing and allow the House to find a humane legislative solution for the Deferred Action for Childhood Arrivals (DACA) recipients. You have the power to allow for a debate and a vote on DACA. As Majority Leader, you and Speaker Ryan can decide what legislation reaches the House Floor More specifically, we ask that you allow a vote to betaen on DACA by June 25 under the discharge peti- tion which was introduced by fellow California Representatives Jeff Denham and Pete Aguilar The time to act is now. We have to do what we can to protect these blameless people who were brought into our country when they were only small children. This is not about being Republicans or Democrats, it's about doing what is right and just. One of your Republican colleagues, Rep. Mia Love, argued recently that "If we do nothing, we abdicate our responsibility to the Executive and Judiciary branches, who continue to shape immigration policy when they have no authority to do so." if you do not allow a vote on DACA, aren't you just washing your hands of your responsibility?" People's lives are in the balance, Mr. Majority Leader, so on behalf of California's 11 million Catholics, many of whom reside in your district, we ask you to act in good faith by allowing a debate and vote now. Respectfully José H. Gomez Archbishop of Los Angeles Vice President US Conference of Catholic Bishops Jaime Soto Bishop of Sacramento President California Catholic Conference Paid for by the California Catholic Conference, a 501(c 4)non-profit corporation Armando X. Ochoa Bishop of Fresno ARCIDIOCESE OF LOSANGELES AND SAN FRANCISCO DIOCESES OF FRESNO, MONTEREY OAKIAND, ORANGE SACRAMENTO, SAN BERNARDINO, SAN DIEGO, SAN JOSE, SANTA ROSA AND STOCKTON