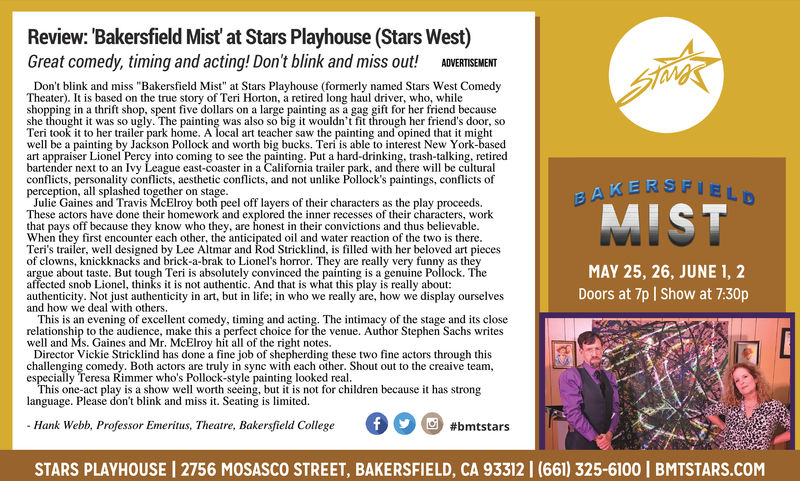 Review: 'Bakersfield Mist' at Stars Playhouse (Stars West) Great comedy, timing and acting!Don't blink and miss out! ADNERISEMENT Don't blink and miss "Bakersfield Mist" at Stars Playhouse (formerly named Stars West Comed Theater). It is based on the true story of Teri Horton, a retired long haul driver, who, while shopping in a thrift shop, spent five dollars on a large painting as a gag gift for her friend because she though t was so ugly. The painting was also so big it wouldn't fit t Teri took it to her trailer park home. A local art teacher saw the painting and opined that it might well be a painting by Jackson Pollock and worth big bucks. Teri is able to interest New York art appraiser Lionel Percy into coming to see the painting. Put a hard-drinking, trash-talking, retired bartender next to an Ivy League east-coaster in a California trailer park, and there will be cultural conflicts, personality conflicts, aesthetic conflicts, and not unlike Pollock's paintings, conflicts of perception, all splashed together on sta KERSPILD Julie Gaines and Travis McElroy both peel off layers of their characters as the play proceeds. These actors have done their homework and explored the inner recesses of their characters, work MIST t pays off because they know who they, are honest in their convictions and thus believable. When they first encounter each other, the anticipated oil and water reaction of the two is there Teri's trailer, well designed by Lee Altmar and Rod Stricklind, is filled with her beloved art pieces of clowns, knickknacks and brick-a-brak to Lionel's horror. They are really very funny as the argue about taste. But tough Teri is absolutely convinced the painting is a genuine Polock. MAY 25, 26, JUNE 1, 2 Doors at 7p Show at 7:30p ected snob Lionel, thinks is not authentic. And that is what this play is really about: authenticity. Not just authenticity in art, but in life; in who we really are, how we display ourselves and how we deal with others This is an evening of excellent comedy, timing and acting. The intimacy of the stage and its close relationship to the audience, make this a perfect choice for the venue. Author Stephen Sachs writes well and Ms. Gaines and Mr. McElroy hit all of the right notes. Director Vickie Stricklind has done a fine job of shepherding these two fine actors through this challenging comedy. Both actors are truly in sync with each other. Shout out to the creaive team especially Teresa Rimmer who's Pollock-style painting looked real is one-act play is a show well worth seeing, but it is not for children because it has strong language. Please don't blink and miss it. Seating is limited. Hank Webb, Professor Emeritus, Theatre, Bakersfield College 00#bmtstars STARS PLAYHOUSE | 2756 MOSASCO STREET, BAKERSFIELD, CA 93312 1 (661) 325-6100 | BMTSTARS.COM