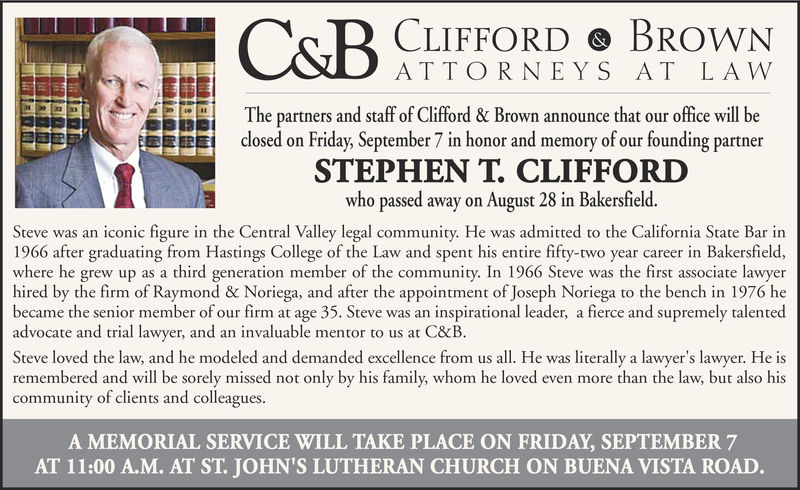 CLIFFORD®BROWN ATTORNE YS AT LAW The partners and staff of Clifford & Brown announce that our office will be closed on Friday, September 7 in honor and memory of our founding partner STEPHEN T. CLIFFORD who passed away on August 28 in Bakersfield. Steve was an iconic figure in the Central Valley legal community. He was admitted to the California State Bar in 1966 after graduating from Hastings College of the Law and spent his entire fifty-two year career in Bakersfield, where he grew up as a third generation member of the community. In 1966 Steve was the first associate lawyer hired by the firm of Raymond & Noriega, and after the appointment o Joseph Noriega to the bench in 1976 he became the senior member of our firm at age 35. Steve was an inspirational leader, a fierce and supremely talented advocate and trial lawyer, and an invaluable mentor to us at C&B Steve loved the law, and he modeled and demanded excellence from us al. He was literally a lawyer's lawyer. He is remembered and will be sorely missed not only by his family, whom he loved even more than the law, but also his community of clients and colleagues A MEMORIAL SERVICE WILL TAKE PLACE ON FRIDAY, SEPTEMBER 7 AT 11:00 A.M. AT ST. JOHN'S LUTHERAN CHURCH ON BUENA VISTA ROAD